Welcome to our fifth issue of the Weaver's Newsletter for 2007!

The big merchandise news this month is that we'll be carrying a limited selection of Mayberry's Finest products online at Weaver's Dept. Store.  We hadn't planned to do so, but the nice folks at Mayberry's Finest and others have told us that they think it would be a good idea because Weaver's is such a central place for Mayberry shopping for so many fans.

The only reason we hadn't planned to carry the products online was that shipping food items is a bit trickier (and more expensive, especially for canned goods) to ship than books, DVDs, T-shirts, etc.  That's particularly the case with our flat rate $5.00 for shipping and handling on all shipments.

You'll still be better off buying Mayberry's Finest at your local grocer or specialty foods store (so keep asking the manager about carrying it), and we may be carrying the line for only a limited time at Weaver's-just until Mayberry's Finest is up and running with the products on its own site.

We hope to have our first Mayberry's Finest up online at Weaver's around Nov. 1.

Here are some other new items at Weaver's:

Step aside, Harry Potter!  Darling boy Mitch Jayne's fascinating new novel, Fiddler's Ghost, has just been released.  It's absorbing reading for anybody who loves a good ghost story, music, skillful writing, or just plain great storytelling from a true master.  Few people have as much of a command and appreciation of language (especially the Ozark variety) as Mitch.  We don't want to give away the plot, but we will say that it's a charming, entertaining and engrossing tale. 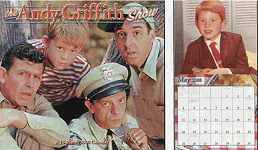 This fifth straight year of an officially licensed TAGS Wall Calendar celebrates that milestone with all color photos for 2008.  Now, don't panic.  "All color" doesn't mean photos only from the color seasons.  Several photos are from the black-and-white era, but just in color because they are publicity stills.  Some haven't been published since the first set of trading cards in 1990.

There's going to be a Mayberry's Finest Recipe Contest later beginning January 1, 2008.  Check out the Mayberry's Finest Web site at http://www.mayberrysfinest.com for more info.  Who knows...your recipe (and your picture) just might be the winner selected to be on the packaging for Mayberry's Finest All-Purpose Baking Mix!  Plus the Grand Prize winner gets a trip to Mayberry Days 2008 (including airfare if you live far enough away to need a plane to get there!). 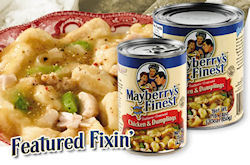 You can also listen to their catchy new jingle by the 2006 and recently re-crowned 2007 International Bluegrass Music Association Entertainers of the Year, The Grascals!  The site has all kinds of neat features, including their Mayberry's Finest Gazette newsletter, which you can read online or download.  And look for the colorful Mayberry's Finest tour bus for The Grascals as it crisscrosses the nation.

* Oct. 20 and 21: George Lindsey helps folks slow down for a fun time at the Music & Molasses Festival at Nashville's Ellington Agricultural Center (440 Hogan Road, just off I-65 on Nashville's south side). In full Goober regalia, George will be greeting fans from 1 to 3 p.m. each day.

The folks from Mayberry's Finest (the new "Andy Griffith Show" packaged foods) will be at the festival with their Mayberry squad car replica and all sorts of goodies.  Enjoy country & bluegrass music, free carriage rides, outdoor kettle cooking, and old-fashioned molasses making at the Music & Molasses Festival.  Other activities and events scheduled include sheep herding with border collies, clogging, and arts & crafts.

* Oct. 27: David Browning hopes you choose to see him as he lights up the Tobacco & Fall Festival with fun in Pennington Gap, Va.

* Nov. 3: Margaret Kerry is guest star for a weeklong Disney cruise to the western Caribbean.  For more info, call GalaxSea Cruises and Tours at 1-800-357-9393.

* July 5: Doug and Rodney Dillard and their band perform at the 22nd Annual Sally Mountain Park Bluegrass Festival in Queen City, Mo.  They will also be doing a special workshop at 11 a.m. called "Stories of Mayberry."  For more info, visit www.sallymountainshow.com.

*July 19: Tentative date for an event in tribute to the legacy of Don Knotts in Morgantown, W.V.  Details TBA.

*Aug. 9: Doug and Rodney Dillard and their band perform at the Second Annual Mayberry in Troy, a fundraiser for the Montgomery County DARE program in Troy, N.C.  Showtime is 7 p.m.  More details TBA.

Here are some other items we're highlighting at Weaver's:

* All New Box Set of All Eight Seasons of "The Andy Griffith Show," Plus the "Danny Thomas" Pilot and Return to Mayberry   $192.00
https://www.weaversdepartmentstore.com/index.php?maincat=72

The suggested retail price for this brand new Box Set of every episode of "The Andy Griffith Show" (plus the "Danny Thomas" pilot episode and the 1986 Return to Mayberry movie) is over $240.00.  The previous 8-season box-set release (without the pilot and the movie and now also discontinued) carried a suggested retail price of $320.00.

We also sell individual complete seasons on DVD at a nice discount. 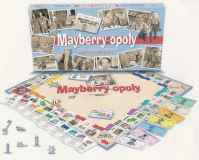 This game has just arrived this summer and we're now shipping.

This brand new board game is a dream come true for "Barney Fife, Realtor" and anyone who has ever wished to own a little piece of that paradise we know and love as Mayberry!

If you love Monopoly and Mayberry or you know somebody who does, then you'll really love Mayberry-opoly.

At just $30.00 per game, Mayberry-opoly is worth the price just to have the cool design of the box and the board to look at or display. We think it's the most fun opoly game ever created.

This Second Season of "Gomer" is one of the best.  It includes visits from Opie and Goober.  Our price is just $32.00 vs. the suggested retail price of $39.00 or more.

And we still have a good supply of the Complete First Season of "Gomer Pyle" at our introductory price of $32.00, which, like the Second Season, is about 20% off the suggested retail price.  (The third season is being released on DVD on Dec. 11.  We'll start taking pre-orders at Weaver's shortly before Thanksgiving.)

* All New Box Set of All Eight Seasons of "The Andy Griffith Show," Plus the "Danny Thomas" Pilot and Return to Mayberry   $192.00
https://www.weaversdepartmentstore.com/index.php?maincat=72

And That's Not All

In addition to our everyday low prices, we also have bunches of items on sale at Weaver's as we head into the Christmas shopping season.  For example, if you haven't checked out the Hal Smith Scripts in a while, we have a few gems left, and they're ALL on sale.

Always popular for holiday gifts are the Mayberry Wooden Building Fronts.  We still have nine different buildings.  They're in the Special Items section of the site.

And you'll find lots of other really good deals on hard-to-find collectibles as you click around the Weaver's site.

Andy Griffith provides the voice of Santa Claus in the animated Christmas Is Here Again, which will be released in November.  The film has an all-star cast including Ed Asner, Shirley Jones, Kathy Bates, Norm MacDonald, Brad Garrett, Dan Roebuck (who also is one of the producers) and Jay Leno as the narrator.

Ron Howard is currently directing Frost/Nixon, based on the hit play about David Frost's interviews with Richard Nixon after he resigned. Ron is also producer of The Changeling, which is being directed by Clint Eastwood and stars Angelina Jolie.

Jim Nabors was promoted to Honorary Corporal in the United States Marines during a ceremony in Hawaii on Sept. 25, the 43rd Anniversary of the first episode of "Gomer Pyle U.S.M.C."

George Lindsey received the first-ever ICON Award from the Nashville Association of Talent Directors at the group's annual breakfast meeting on Oct. 17 at the Wildhorse Saloon in Nashville.  Sal-luuute, George!

George also was interviewed by Ralph Emery on the Oct. 8 installment of "Ralph Emery Live" on the RFD-TV Channel.

Richard O. Linke, TAGS associate producer and longtime personal manager to Andy Griffith, Jim Nabors and other TAGS-related folks, celebrates his 90th birthday on Oct. 23.  Friends and family (and perhaps a TAGS cast member or two) are throwing him a big party on the Big Island of Hawaii where he lives.  Celebrate good times and a wonderful life, Dick!  (We hope to have a photo to share in our next issue.)

James Best plays McClancy in Moondance Alexander, which will be in theaters nationwide beginning Oct. 19.  The film, written and produced by James' daughter, Janeen, and her husband, Michael Damian (who also directed), has already won an award at April's Newport Beach Film Festival.

Lots of events involving TAGS stars are beginning to take shape for 2008.  It promises to be another fun year in Mayberry!

You can find Mr. Weaver's full lineup of items at http://www.weaversdepartmentstore.com.  (Or go to http://www.mayberry.com and click on the Weaver's link at the top right of that front page.)

We also have our phone order line available for shopping convenience.  The number is (615) 604-1298.  Our phone line has part-time hours.  It is generally manned Mon.-Sat., 9 a.m.-6 p.m. CT, but there will not always be somebody there even during those times.  However, you can always leave a message 24 hours a day and we'll call you back "on our nickel" to get your order at a time convenient to you.  And of course you can always order online or by mail any time.

You can find most of our items at our location on the third floor of the Main-Oak Emporium at 245 City Hall Street in Mount Airy, N.C.

The next issue of the Weaver's Newsletter is scheduled for December (with an eBullet coming out in November).

That's all for now.  We hope you have fun browsing at Weaver's and visiting http://www.mayberry.com.

To unsubscribe from the Weavers's Newsletter enter your subscription email address: