We have four new T-shirt designs in the Apparel Section of Weaver’s.  All are available in adult sizes Small to 2X-Large.  They’re proving to be some of our most popular offerings in a while.  They’re $17 each and made of sturdy 100% preshrunk cotton.  We think they add good fun to our lineup of licensed Mayberry T-shirts!

Here’s a quick look at the four new designs: 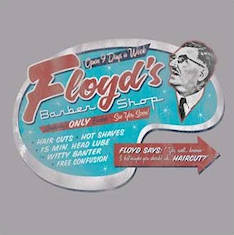 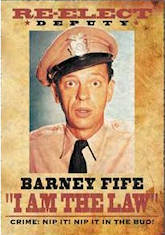 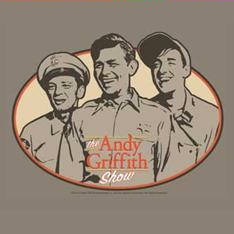 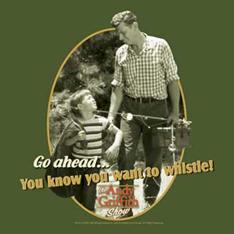 And the Apparel Section of Weaver’s has sweatshirts, Goober beanies, and more than 20 designs of T-shirts (most available in Adult sizes Medium through 2X, and several also available in Small).

Available at a Really Nice Discount!

This oversized 320-page hardcover book (coffee-table style) is compiled by Steve Cox and Kevin Marhanka.  The thoroughly researched book has lots of interviews with people who worked with Don Knotts and has more than 200 photos, including a 16-page section of color photos.

It’s a great gift for any Barney Fife and Don Knotts fan to give or receive.  And best of all, we’ve got it for $5.00 off the cover price right out of the gate!

As Barney himself said, “Aw, big ain’t the word for it!”

* And Weaver’s also has nice deals on these great DVDs of favorite Don Knotts movies—the ideal accompaniment to this fascinating book about Don’s film career:

This 2009 edition of “The Andy Griffith Show” Wall Calendar turns back the clock and has all black-and-white photos, all of which are also from the black-and-white seasons (1960-65).

There’s a nice variety of Mayberry characters in this calendar.  In addition to Andy, Barney, Aunt Bee, Opie, and Gomer, there are photos of Goober, Floyd, Fun Girl Daphne, and even Mr. McBeevee.  Several of these photos have never before been published.  We have just a few left this year.

Also, if you haven’t gotten your “highly collectible” 2008 Wall Calendar, we still have some left, including in a special combo offer with this 2009 calendar for only $22.00.

Many graduations—not to mention Father’s Day—are just around the corner.  This tie is out of production, so it’s now even more of a collectible.  We unexpectedly received one last small shipment from the licensed manufacturer.  We’ve got just those few left, and then that’ll be it for this popular fashion statement.

This silk necktie features Barney in black and white (it therefore coordinates with any outfit).  Anyone who wears this tie is guaranteed to look suave and worldly.  Wear it with the old salt and pepper and it’ll be just right for the dips.  Made with fine silk from the Orient.

Whether you’re looking for a Mayberry T-shirt (or for winter, maybe a sweatshirt), a felt Goober beanie for your noggin, something Mayberry for your car, decorative wooden building fronts, Mayberry-related DVDs and CDs, artwork (including some autographed pieces), books, board games and even Barney Fife thermometers and light switch covers, we’ve got most things Mayberry online at Weaver’s.  Drop by and have a look around.  (We probably even have that special Mayberry item that Santa might not have remembered to put on his sleigh this year.)

Phone Orders
In addition to accepting orders online or by mail, our Weaver’s Dept. Store has a phone number FOR ORDERS ONLY (615) 604-1298.  The phone number is generally in operation from 9 a.m. to 6 p.m. CT Monday through Saturday.
Please call this number only for ordering or for inquiring about orders placed by phone.  All inquiries about online orders and mail orders should be made online and by mail, respectively.
NOTE: This order number does not ring to TAGSRWC HQ, so you shouldn’t call this number with questions about general fan club operations, trivia or various events, etc., but only to place an order by phone or inquire about orders placed by phone.

Ol’ Ben Weaver heard that Stevens’ Department Store over in Mount Pilot is accepting these three credit cards, so, following Bert Miller’s gentle advice, Ben has grudgingly agreed to accept these for his customer’s purchases, too.

* May 6-TBA: Ronnie Schell stars in  Don't Leave It All to the Children--The Musical at the Actors' Temple Theatre, 339 West 47th Street in New York City.  Performance times are 3 p.m. Wed., Sat., and Sun. and 8 p.m. on Sat.  Visit http://www.telecharge.com for tickets and more info.

* May 13: It's going to be BIG when David Browning patrols the Small Business Expo in

* May 29: Get ready to rumble when David Browning rolls into the Salem Avalanche baseball game in

* May 30: Relax and enjoy yourself while David Browning is on patrol at the Clinch River Festival in

* June 6: Yoo-hoo!  Do you know who should see David Browning at the Jane Lew Celebration in Jane Lew, W.V.? You, that's who!

* July 18 and 19: Smoky Mountain Fan Fest featuring James Best and other members of the “Dukes of Hazzard” cast, at Smokies Stadium in (The event also includes a concert with Merle Haggard!)  Tickets are on sale now at (865) 286-2300, with info also at http://www.concertsinthesmokies.com.

* Aug. 8: Maggie Peterson Mancuso joins two of her TV brothers, Doug Dillard and Rodney Dillard, and their band for a performance at the Third Annual Mayberry in Troy, a fundraiser for the Montgomery County DARE program in   More details TBA. 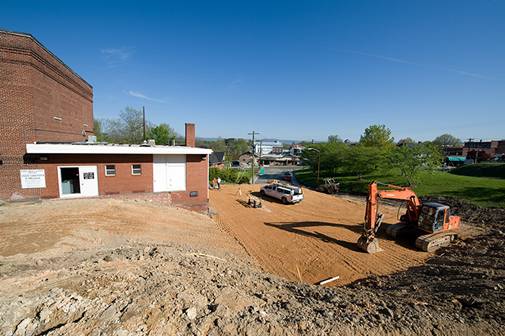 The ground has been prepared and actual construction is now beginning for the new Andy Griffith Museum adjoining the Andy Griffith Playhouse in Mount Airy.  (As far as we’ve heard, there has been no dynamite blasting and no worry about a loaded goat!)
The museum will be home to Emmett Forrest’s Andy Griffith Collection and other cultural exhibits and programs for the community.  The museum is on track to be open this fall—likely in time for Mayberry Days.  Photo by Hobart Jones.

* Oct. 12-17: A Cruise to Mayberry 4 This year's cruise is a 5-day version and it's a relaxing, fun time for all.  Being on the cruise is a bit like sitting on Andy's front porch and watching the traffic on the road--only there's no road and no traffic, just the waves and a breeze Visit the website for information and links to photos from previous Mayberry cruises. 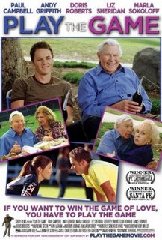 Play the Game, Andy Griffith's latest movie, was released in a limited number of theaters in February. It's starting to get some wider release, but it remains to be seen how many theaters eventually show it, especially with the crowded schedule of summer blockbusters around the corner. But that was the same story for Waitress, Andy's 2007 independent film that followed a similar release schedule and went on to become a critical and box-office success against big-budget competition.

The cast of Play the Game also includes Doris Roberts (Raymond's mom on "Everybody Loves Raymond"), Liz Sheridan (Jerry's mom on "Seinfeld") and Rance Howard and Clint Howard, so the film has several talented people who should stir some interest with audiences.

And "Waitin' on a Woman," the Brad Paisley song featuring Andy, has won another award, this time for Music Video of the Year by the . The award was announced just prior to the national telecast of the awards show on April 5.

Ron Howard was in the audience at the Academy Awards in February.  His Frost/Nixon film had several nominations (including Best Picture and Best Director), but didn’t pick up any statues.  Angels & Demons, Ron’s next release as director will be in theaters May 15.

Look for Clint Howard on duty in another big May film, Night at the Museum: Battle of the Smithsonian, which is coming out on May 22.  In other Howard family news, Paige Howard, daughter of Ron, has her first major credited role in a movie that has been in theaters this spring.  She plays Sue O’Malley in Adventureland.

Rance Howard has also been busy.  He’s in several movies that are in various stages of production.  And he was in a poignant episode of “ER” in February.  He played Dr. Oliver Kostin, a patient (and inspiring doctor) of the ER in an episode called “A Long, Strange Trip.”

Rance also joined Lee Majors as guest of honor at the 12th Annual George Lindsey/UNA Film Festival in , in early March.  The festival was another big success this year.  And it was reunion for Rance and George Lindsey, who have known each other for more than 50 years.  They first worked together in on the “Kraft Television Theatre” in 1957.

This year’s festival kicked off with a special presentation by TAGSRWC’s Kenneth Junkin, representing in the area.  Partlow is home of the , which was built in conjunction with Special Olympics with funds raised through George’s celebrity golf tourney in the 1970s and 1980s.  Kenneth expressed the community’s deep appreciation for George’s efforts and presented George beautiful photos of the aquatic center.  The photos will be part of the permanent George Lindsey Collection at the .


James Best has been busy writing this winter.  (His autobiography will be out this summer, and Weaver’s of course will be stocking it.  What a life’s story he has to tell!)  But for now his attention is turning to important things…such as fishing.  He recently took time out for a trip to .  He also has some personal appearances coming up this year, including a big “Dukes of Hazzard” reunion in Pigeon Forge, (See Floyd’s bulletin board for more info.)

Betty Lynn reports that she’s doing well.  She has been keeping a busy social calendar in , including attending the Arts Ball, an annual fundraiser for the Surry Arts Council in March.

We had missed the news of the passing in November of three actors who appeared in single episodes of TAGS passed in November.  Paul Gilkes, one of our unofficial correspondents, recently heard news about them and contributed to this report:

Michael Higgins died Nov. 5, 2008, in of heart failure.  He was 88.  He played diplomat Mr. Clifford in “Barney Holds a Summit Meeting,” Episode 240, and had a long and distinguished career in films and on the stage.  He is survived by Elizabeth, his wife of 62 years, and three children.

Wayne Heffley died Nov. 19, 2008, in , of kidney failure at age 81.  He played Harry (definitely no cream puff) in “Howard’s Main Event,” Episode 225.  Among his many credits were a couple of episodes of “Gomer Pyle, U.S.M.C.” and on episode of “Matlock.”  H e excelled in the roles of tough guys and authority figures in a career spanning more than 50 years.

The next issue of Weaver’s Newsletter is scheduled for June (with an eBullet coming out in late May).

That’s all for now.  We hope you have fun browsing at Weaver’s and visiting http://www.mayberry.com.

To unsubscribe from Weaver’s Newsletter enter your subscription email address: