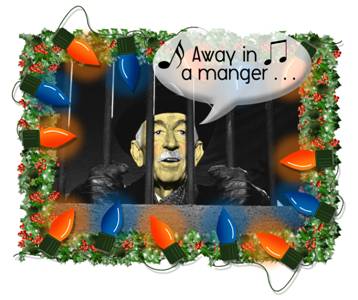 Even ol’ Ben Weaver is a softy this time of year.

“Kind Behind the Eyes!”

We have a fairly brief report as we wind down 2008 and gear up for TAGSRWC’s 30th Anniversary in 2009.
Here are a few news items and reminders about what’s going on and coming up in Mayberry.  Remember: You can find us online at www.mayberry.com  (and just click on one of the Weaver’s Dept. Store logos at the top) or go straight to www.weaversdepartmentstore.com.

Hot Off the Press This Month and at a Really Nice Discount!!

This brand new, oversized 320-page hardcover book (coffee-table style) is compiled by Steve Cox and Kevin Marhanka.  The thoroughly researched book has lots of interviews with people who worked with Don Knotts and has more than 200 photos, including a 16-page section of color photos.

It’s a great gift for any Barney Fife and Don Knotts fan to give or receive.  And best of all, we’ve got it for $5.00 off the cover price right out of the gate!

As Barney himself said, “Aw, big ain’t the word for it!”

* And Weaver’s also has nice deals on these great DVDs of favorite Don Knotts movies—the ideal accompaniment to this fascinating book about Don’s film career:

Featuring The Ghost and Mr. Chicken, The Reluctant Astronaut, The Shakiest Gun in the West and The Love God?  This super Hero collection of four classic Don Knotts movies from the 1960s on DVD is hard to beat.  You get all four movies for a nice price that even cost-conscious Barney Fife would jump at.

This classic film starring Don Knotts and featuring the voice of Elizabeth MacRae is a wonderfully entertaining and innovative use of animation and live action.  Includes introduction by Don Knotts and other special features.

After having all color photos in the 2008 calendar, this 2009 edition turns back the clock and has all black-and-white photos, all of which are also from the black-and-white seasons (1960-65).

There’s a nice variety of Mayberry characters in this calendar.  In addition to Andy, Barney, Aunt Bee, Opie, and Gomer, there are photos of Goober, Floyd, Fun Girl Daphne, and even Mr. McBeevee.  Several of these photos have never before been published.

Also, if you haven’t gotten your “highly collectible” 2008 Wall Calendar, we still have some left, including in a special combo offer with this 2009 calendar for only $22.00.

This special Grab-Bag, inspired by Otis and his artistic efforts with mosaics, pieces together several collectible Mayberry items that will add beauty and grace to any wall in home or office...or courthouse cell!

Each of Otis’s Grab-Bags contains at least the following:

All proceeds (not just the profits, but 100% of the $30 price) are going toward our annual support of the Surry Arts Council and its Mayberry Days festival in September in   So with a Grab-Bag purchase, you get a good deal while also supporting a good Mayberry cause!

This tie is out of production, so it’s now even more of a collectible.  We’ve unexpectedly received one last small shipment from the licensed manufacturer.  We’ve got just those few left, and then that’ll be it for this popular fashion statement.

This silk necktie features Barney in black and white (it therefore coordinates with any outfit).  Anyone who wears this tie is guaranteed to look suave and worldly.  Wear it with the old salt and pepper and it’ll be just right for the dips.  Made with fine silk from the Orient.

And we also have several other classic, out-of-print Mayberry books, including Inside Mayberry, The Official Andy Griffith Show Scrapbook, Mayberry My Hometown, and Aunt Bee’s Mealtime in Mayberry.  (Those last two titles are in especially pristine condition and even still in their original shrink wrap from their publishers!)

Whether you’re looking for a Mayberry T-shirt (or for winter, maybe a sweatshirt), a felt Goober beanie for your noggin, something Mayberry for your car, decorative wooden building fronts, Mayberry-related DVDs and CDs, artwork (including some autographed pieces), books, board games and even Barney Fife thermometers and light switch covers, we’ve got most things Mayberry online at Weaver’s.  Drop by and have a look around.  (We probably even have that special Mayberry item that Santa might not have remembered to put on his sleigh this year.)

Along with Visa and MasterCard, Weaver’s Dept. Store now is set up to accept DiscoverCard.

* Jan. 23-Feb. 15: Ronnie Schell performs in the musical-comedy revue Don’t Leave It All to Your Children at Hollywood Playhouse in  For more info, visit http://www.hollywoodplayhouse.com/.

* Aug. 8: Maggie Peterson Mancuso joins two of her TV brothers, Doug Dillard and Rodney Dillard, and their band for a performance at the Third Annual Mayberry in Troy, a fundraiser for the Montgomery County DARE program in   More details TBA. 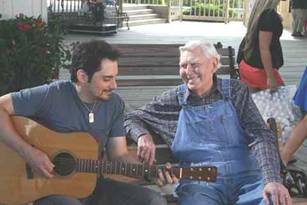 Brad Paisley’s hit music video “Waitin’ on a Woman,” which features Andy Griffith, won a Country Music Association Award for Music Video of the Year on Nov. 12.  Of course, we all knew it would win because…it was indeed the year’s best.  Sa-lute to Brad and Andy!

There’s still no release date announced for Play the Game, the movie Andy filmed in fall of 2007.  The film also features Rance Howard and Clint Howard.

Frost / Nixon, the latest film directed by Ron Howard, opened in a few theaters on Dec. 5 with wider release on Dec. 26.  The movie is based on the hit play about David Frost’s interviews with Richard Nixon after he resigned.  The film had its world premiere last month at the Times BFI 52nd London Film Festival.
Also, Ron is currently in post-production Angels & Demons, the sequel to The Da Vinci Code that stars Tom Hanks.  The release date is set for May 15, 2009.

And look for Ron in “Ron Howard--50 Years in Film,” a 90-minute special about his career.  It premieres on Turner Classic Movies (TCM) at 8 p.m. ET on Dec. 29 (and it runs again three hours later and will likely have other airings).  TCM will also be showing a couple of the movies Ron directed that first night.

And we know it’s controversial, especially if you were for the other guy, but politics aside, the political ad that Ron Howard and Andy Griffith did in support of Barack Obama was a significant bit of history.  If nothing else, it was the first time that Ron sort of directed Andy in a film, even though they were on different coasts at the time.  Not to in any way promote one side or the other (it’s a moot issue now, anyway), but just to present a piece of Mayberry-related history, here’s a link to the video they made: http://tinyurl.com/opie-fonzy

George Lindsey filmed a pilot for a TV comedy with Ray Stevens earlier this month.  And at the end of October he participated with James Best and Norman Lloyd (father of Josie Lloyd, aka Lydia Crosswaith) in a seminar about “The Jar,” an episode of “The Alfred Hitchcock Hour.”  It was an outstanding evening of discussion about one of the finest hours in TV history.

, and the whole Mayberry world lost one of the all-time greats when L.P. Venable passed away suddenly in October.  With wife Alma (affectionately known to many Mayberry friends as Aunt Bee), L.P. was proprietor for more than 40 years of the Mayberry Motor Inn, on the .  Their friendship has made the Motor Inn the home away from home for many Mayberry fans and countless others.

It has always been reassuring to arrive in after what was often a full-day’s drive, pull into the Motor Inn and to be welcomed like family by L.P. or at the front desk.  Or as often as not, both would be there, especially during Mayberry Days.

You simply can’t find better folks to be around than L.P. and and their entire family.  And everybody who knew L.P. certainly would agree that there wasn’t a more honorable, decent, generous and humble man than L.P.  You always knew where L.P. stood.  If you weren’t standing with him, that was a sign that you probably needed to reexamine where you stood.  L.P. was one of those rare people who was usually right about most things.  He had great wisdom.  But most of all, L.P. was a tremendous friend.

Here’s the obituary that was published in the Mount Airy News:

MOUNT AIRY—Mr. Luther Parker “L.P.” Venable, age 72, of in passed away Friday, Oct. 24, at his home.  Mr. Venable was born June 25, 1936, in to the late Raymond Esker and Ruby Parker Venable.  He was the owner and operator of Mayberry Motor Inn for over 42 Years, was a member of and enjoyed landscaping, gardening and woodworking.

Surviving are his wife of 53 Years Mrs. Alma Marsh Venable of the home, one daughter who he was so very fond of, Vicky Venable Snow of Mount Airy; three grandsons who looked up to their grandfather as a father figure and who were his pride and joy: Mikel Snow, Joshua Snow and Jeremy Snow, all of Mt. Airy; and one brother Don Venable of Pinnacle.  In addition to his parents, Mr. Venable was preceded in death by a sister Glenda Sutphin and by a brother Harold Venable.  Funeral services were be held Monday, Oct. 27, at the Moody Funeral Home Chapel in Mt. Airy with services conducted by Rev. Bill Watson and Rev. Dean Eaton.  Burial followed in the .

Our sympathies continue to go out Alma and all of L.P.’s family.  And while our visits to and the Mayberry Motor Inn will have a vacant chair now, our hearts will be full of love and memories of this wonderful friend.

The next issue of Weaver’s Newsletter is scheduled for February (with an eBullet coming out in January).

That’s all for now.  We hope you have fun browsing at Weaver’s and visiting http://www.mayberry.com.

To unsubscribe from Weaver’s Newsletter enter your subscription email address: